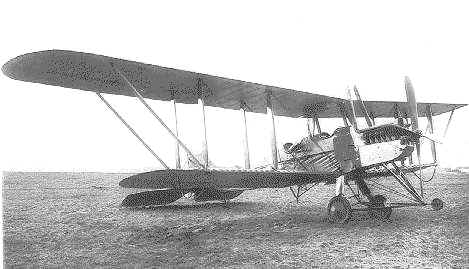 You may be interested to know that one of the "remarkable" three-seat versions of the R.E.7, fitted with a Rolls-Royce Eagle engine, was in service with No. 20 Squadron in France from about August 1916 until it crashed on the date of its withdrawal, January 31st, 1917.

Its armament consisted of two free Lewis-guns and one fixed Vickers-gun firing through the propeller - including, on occasions, the blades.  When in action the front gunner had to perch himself precariously on a Scarff Ring fitted in the top centre-section, but all too frequently came adrift when rotating the gun mounting and invariably finished up in the pilot's cockpit.

The ingenious R.A.F. periscope bomb-sight was fitted for use by the pilot, but since not one of the many 500 lb bombs dropped from this aircraft was ever seen to explode, this excellent piece of apparatus proved to be entirely superfluous.

Extract from: "The Courage of the Early Morning"
(The story of the famous WW1 ace Billy Bishop, p35):

Bishop, in those first weeks of 1916, was no more than a highly-expendable observer.  By mid-January the long-promised new planes were delivered -

A strange flying contraption known as the RE7 (Reconnaissance Experimental No. 7).  It was a machine designed to mount four guns, cameras, and all manner of other equipment including a 500-pound bomb lashed to the fuselage. The idea was to fly over the target, take a quick look over the side of the cockpit, pull the wire cable - and away the bomb would go.  All that was wrong was that this machine stoutly refused to leave the ground when all this gear, plus pilot and observer, were packed into it.

The first time we tried to take up our RE7, Roger Neville gunned across Bois d'Inghem airport at least a dozen times into the wind, but the wheels never left the ground. Consultation between senior officers followed. They decided that we should try to become airborne without the 500-pound bomb. The wheels bounced a few times, but we still weren't in the air at the point on the runway where we would have to throttle down and turn around to avoid running off the field.

More consultation. They decided to move us to the larger airfield at St. Omer, ten miles away, in the hope that with a longer run the RE7 might consent to struggle into the air.

So Bishop lugged his four machine-guns aboard a truck bound for St. Omer, while Neville took the lightened RE7 into the air.  (The bombs, by common consent, were left behind at Bois d'Inghem.)  On the longer runway at St. Omer the RE7 finally took the air with a crew of two and armament reduced to a pair of machine-guns.  These guns, however, gave Bishop little comfort:

It will always remain a question of reasonable doubt whether anybody could have fired the guns at an enemy, because to fire a bullet into the clear you would first have to shoot through the maze of wires between the upper and lower wings which gave the RE7 the appearance of a bird cage.  Even with only a fraction of the equipment its designers had assigned to it on the drawing board, the RE7 was, in parlance of the RFC, a "pig".  - On a windy day a boy on a bicycle could pass it.

It was possibly the most dangerous plane ever accepted as operational by the Allies...  Between its top speed and the speed at which it stalled and spun out of control there was a margin of barely twenty miles an hour.  It was designed to reach 80 miles an hour but seldom could be nursed to 60, and it stalled at 48 miles an hour.  This characteristic made take-offs, landings and manoeuvring in the air agonizingly difficult.  Yet it was impossible to treat the RE7 gently.

When a pilot wants to change direction he has to throw the stick in the direction he wants to go - really slam it.  Putting on rudder was done about as gently as throwing out the clutch of an automobile.  The things were nearly as manoeuverable as ten-ton trucks, but by no means as safe.

The RFC tried an emergency operation on the RE7, in the form of heavier and more powerful engines.  But the experiment was a dismal failure.  The new engines were too heavy for their supports, which snapped off with disconcerting frequency if the machines were landed at all roughly - as they usually were.  The Suicide Squadron, as 21 Squadron was now dubbed, hastily switched back to the old underpowered engines.

For a time they were placed in semi-retirement by being withdrawn from the front and assigned to fly aerial cover over General Sir Douglas Haig's headquarters at St. Omer.  It was a strategic target that housed not only Haig and his staff, but visiting political dignitaries and even royalty from time to time.  Bishop was dubious about the wisdom of defending it with 21 Squadron's lumbering aircraft:

Day in and out we beetled over headquarters and the adjoining town.  Fortunately the enemy did not seem to know we were there, for what we could have done to defend the place I do not know.  Presumably we would have tried to join combat with the enemy if he had come along and, I imagine, have been shot down ingloriously for our pains.

By March, 1916, the Allies' need for air power was so desperate that the Suicide Squadron was recalled to front-line duty.  Haig had decided to launch an unprecedented aerial offensive in hope of breaking the stalemate of trench warfare.  On March 9, 1916, six RE7s from 21 Squadron were part of a formation of thirty-one aeroplanes that bombed Carvin Junction some twenty miles behind the enemy lines.  It was the largest formation ever assembled for a raid.  To enable the RE7s to lift the bombs they were stripped of their guns and ammunition.  They had to fly deep behind enemy lines, find their targets, drop the bombs and make their undefended way back home.  Next day Bishop wrote to Margaret:

In the air you feel only intense excitement.  You cheer and laugh and keep your spirits up.  You are all right just after you have landed as you search your machine for bullet and shrapnel holes.  But two hours later when you are quietly sitting in your billet you feel a sudden loneliness.  You want to lie down and cry.

In April, 1916, the Suicide Squadron moved to another aerodrome at Hesdin.  Their task was observation in the area between Albert and Peronne - the Somme.  This open country - the clumps of woods had long since been reduced to ragged stumps by shellfire - was the front on which the summer offensive would be launched.  As the weather improved, so the number of reconnaissance flights increased.  A Prussian soldier complained in a letter to his parents that the, "English will soon be taking the very caps off our heads".

In addition to fatigue and nervous exhaustion, Bishop was plagued with misfortune on the ground.  Driving a tender loaded with equipment to repair a crashed machine a few miles from base, Bishop collided with an army lorry and was severely shaken up.  He made light of it in a letter to his parents.

All I said when it happened was - "I am annoyed!"  You see, I always remember Father saying that blasphemy is a totally unnecessary form of expression and extremely poor manners.

A few days later he was inspecting his machine in the hangar when a supporting cable above him broke and struck him on the head.  He was unconscious for two days and medical examinations showed that he had narrowly escaped a serious skull fracture.

Some days later he had a tooth pulled.  It had become infected and he had to stay in hospital for a week.

Next, Roger Neville cracked up the plane in a rough landing.  Bishop was thrown heavily forward and cracked his knee...