HISTORY OF THE SUPERMARINE SEAGULL-V and WALRUS

By Group Captain Ron Gretton A.M., RAAF (Rtd.)
(Quoted from his speech at the handover of a restored Walrus to the RAAF Museum, 4 April 2002.) 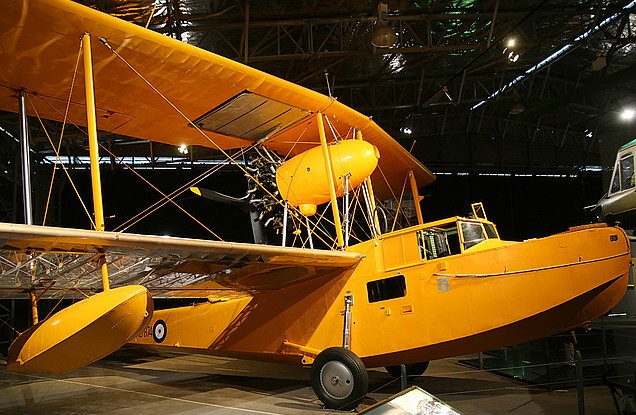 The restored Walrus in the Point Cook RAAF Museum.  Note that the starboard wing skin has been left transparent, showing the underlying structure.

During the late 1920s, the Royal Australian Air Force was looking for an aircraft to replace its nine aging Supermarine Seagull III aircraft, which was basically an all-wooden construction.  The Seagull III was used in hydrographic work along the Great Barrier Reef and in coastal areas during the mid to late twenties.  Because of its wooden construction, hull life in semi-tropical conditions was likely to be short - due to the heat, humidity and marine growth fouling that proved to be fatal to wood laminates and their bonding.  As a result of this experience, the RAAF developed a specification for an Air-Sea Rescue / Reconnaissance aircraft, capable of being catapulted from Cruisers (which the Seagull III was not) and able to carry a full military load, including bombs and with improved maintenance and performance, especially in tropical conditions.  The specification was so demanding that the editor of an English magazine at the time (The Aeroplane) stated that, "The Australians want everything but the little black boy to cook meals".  The specification was issued to all British Aviation firms, including Vickers Supermarine, in late 1931.

At that time at Supermarine, a new design (designated 'Seagull V') was well in progress as a private venture and this aircraft corresponded very closely to the Australian specification.  The chief designer of this aircraft was Reginald J. Mitchell, the designer of the famous Spitfire and other Supermarine aircraft, including the Schneider Trophy-winning S6B racing floatplane.

R. J. Mitchell had started his technical life at age 16 as an apprentice with a locomotive engineering firm.  In 1917, aged 22, he joined Vickers Supermarine and at the age of 24, became chief designer.  He was appointed director in 1928, a position he held until his untimely death in 1937 from cancer, aged 42.  (He did however manage to see the prototype Spitfire fly just prior to his death.)

The Seagull prototype, with registration number 'N1' painted on the hull, was successfully flown by Captain "Mutt" Summers, chief test pilot for the Vickers Group, on the 21st of June 1933 from Southampton Waters.  Five days later, at the Society of British Aircraft Constructors show at Hendon Aerodrome near London, the aircraft's performance and manoeuvrability was demonstrated by Summers, who (having previously made quiet enquiries about its strength and capabilities) proceeded to `Loop the Loop' - much to the surprise of everyone present, especially R. J. Mitchell !

After Supermarine demonstrated its catapulting capability, Air Ministry specification 6/34 was issued and the Australian Government placed an order for 24 'Seagull V' aircraft in August 1934.  The first Australian Seagull V (Serial A2-1) was flown on the 25th of June 1935 and was delivered to HMAS AUSTRALIA on the 9th of September 1935.

...It was during the production of the first 12 Seagull V aircraft that the British Air Ministry issued a specification for 12 of these aircraft, but the name was changed from 'Seagull' to 'Walrus'.

Production was slow during the early years, mainly due to the need to prioritise Spitfires for Britain's war effort.  However, by the time that production of the Walrus was to finish in 1944, 741 aircraft had rolled out of the factories at Woolston and Saunders Roe, on the Isle of Wight.  The aircraft was also produced as a wooden version, titled 'Walrus Mk II'.  These versions were used almost exclusively for Air-Sea Rescue duties.

Despite having many names, this aircraft type had developed into one of the most versatile aircraft ever designed and served its purpose well.

One aircraft magazine described it as: "...looking like a pregnant duck waddling down the runway"...  but if you were one of the 7,000 Allied airmen and sailors rescued in World War 2, you would likely say that the Supermarine Walrus was the most beautiful amphibious biplane ever built.

You would certainly have cause to thank R. J. Mitchell for his brilliant and largely unsung design.  In Air-Sea Rescue, it proved invaluable... 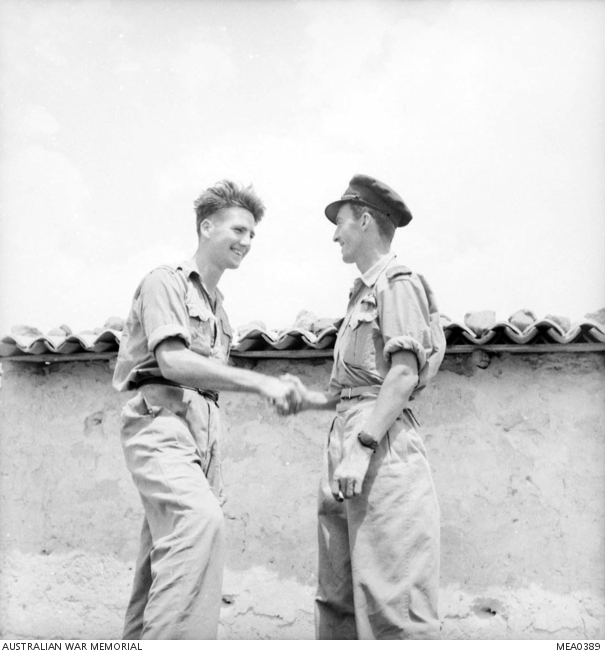 Sicily, 1943.  Sergeant Pilot John Howell-Price,  of Sydney, NSW (left) congratulated by Squadron Leader R. N. B. "Reg" Stevens DFC RAAF , also of Sydney, NSW, upon his arrival back at No. 3 (Kittyhawk) Squadron RAAF  after being picked up by the Sea Rescue Flight some miles off the coast of Sicily.  Howell-Price's Kittyhawk was hit by heavy anti-aircraft fire and forced to ditch into the sea about a mile and a half off Catania Harbour.  Upon learning of this, Squadron Leader Reg Stevens took off to locate the missing pilot.  He did sight him, radioed in and circled overhead until the Air Sea Rescue Supermarine Walrus aircraft arrived.  The Walrus had trouble landing in the harbour due to fire from an 88mm gun.  Sqn Ldr Stevens then attacked the gun crew, sustaining some hits before silencing it.  He subsequently was forced to crash land behind  Allied lines.  Both men returned to the Squadron at Agnone later that day.  [AWM MEA0389] 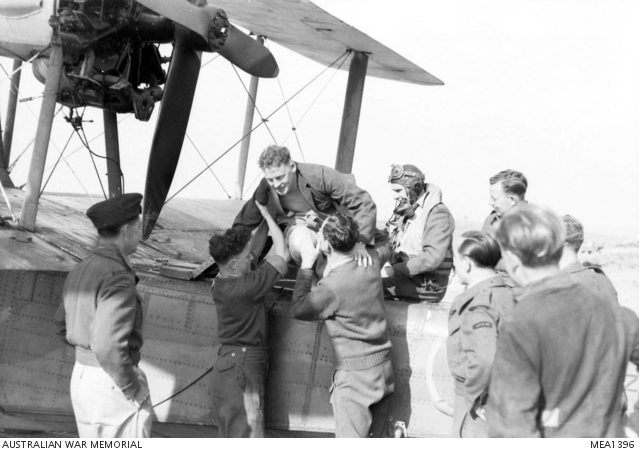 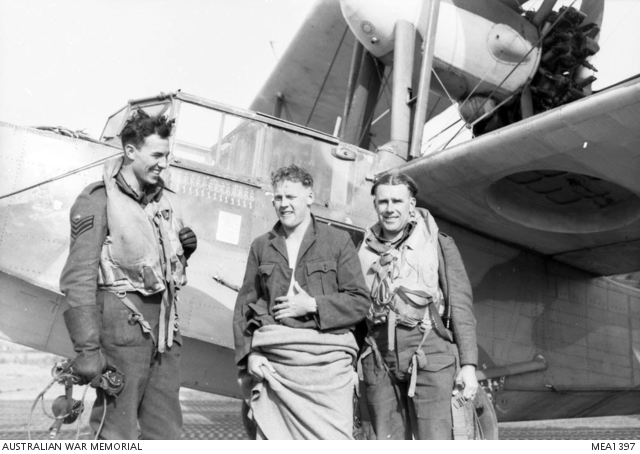 Cutella Italy. c. April 1944.  [Left:]  A Supermarine Walrus amphibian aircraft which came to the rescue of Flight Sergeant Harry Eaves, of No. 450 (Kittyhawk) Squadron RAAF, of Glenderg Grove, Vic, when he was forced to put his aircraft down in the sea off Pescara, Italy, after it had been hit in the cooling system by enemy ground fire.  [AWM MEA1396]
[Right:] Eaves with Flight Sergeant E. J. Holmes DFM of Essex, England, and Wireless Operator J. R. Berry DFM of New Plymouth, New Zealand, both members of the Air-Sea Rescue crew.  [AWM MEA1397.  Note the marks painted below the cockpit window, apparently denoting at least 13 "rescues".] 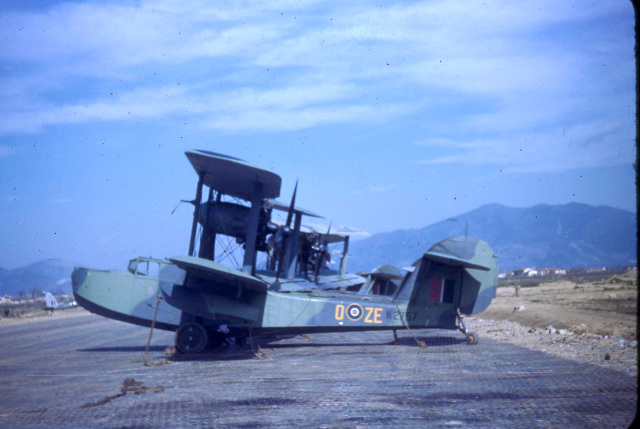 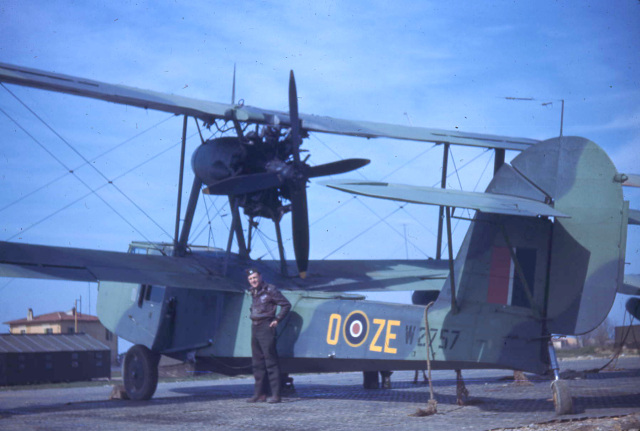 "...The whole Wing had had an op, and we were just getting refuelled.  And we were right on the coast, good spot.

And out of the blue came four Thunderbolts, American aircraft, and they shot us up.  I'm yelling to the ack-ack post near me, 'Shoot them down!'

I said, 'Strike a ruddy light', and here we are, there's fires galore, I've got a photo there. 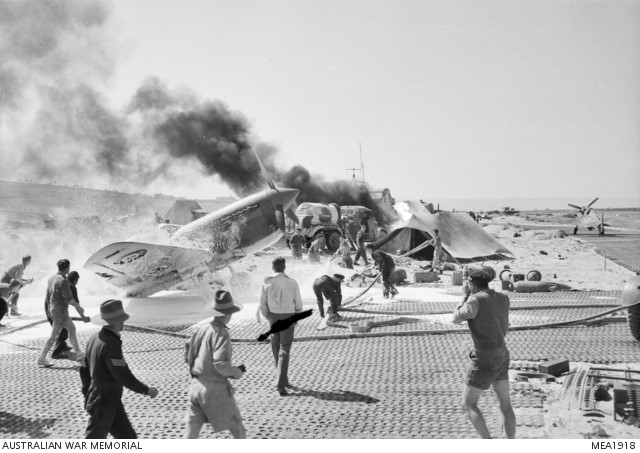 ...Best hunting they ever had.  And the only aircraft on there were Kittyhawks and Mustangs - all American aircraft!

...And one Walrus pilot (which was the air/sea rescue) he was the bloke that was killed." 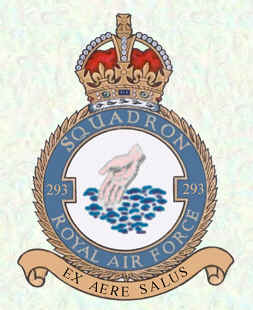 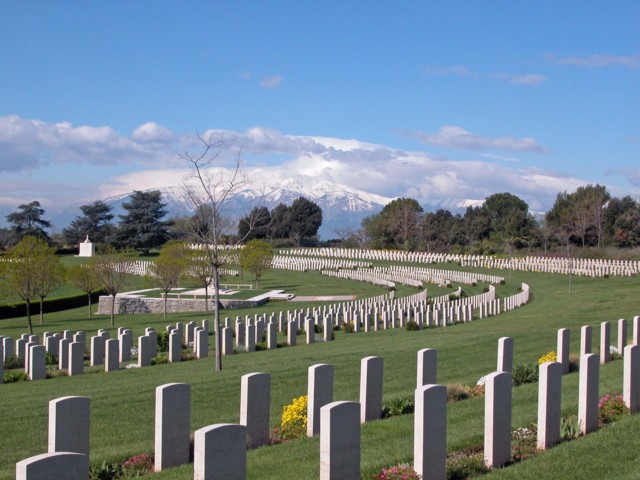