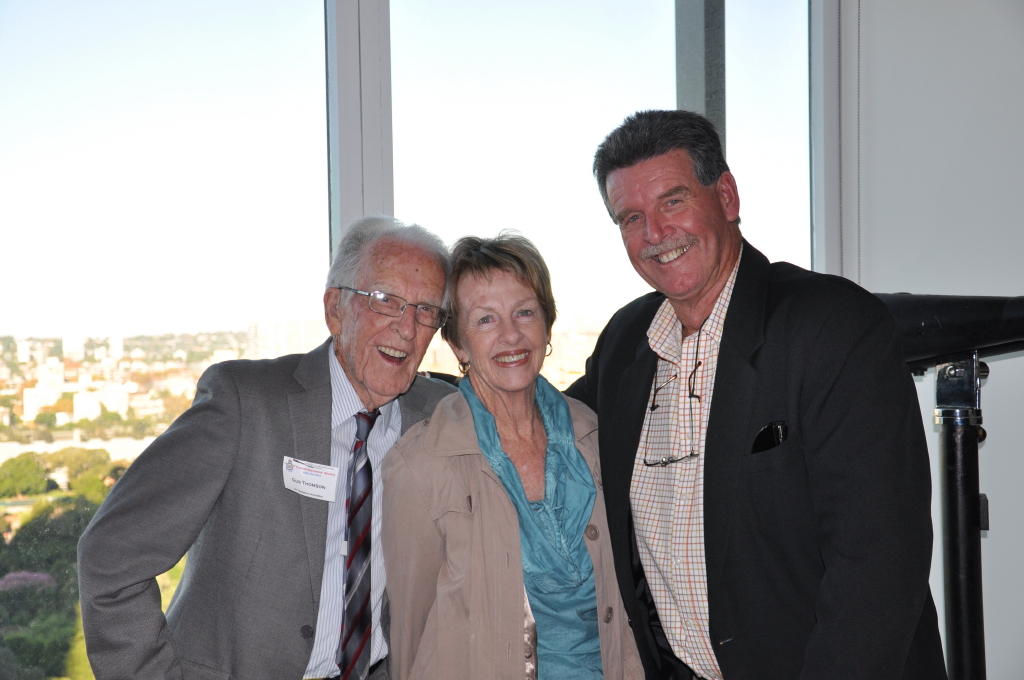 Good afternoon everyone.  We are here to honour Alexander THOMSON; father, grandfather and great-grandfather; and reflect upon his wonderful life.
A life that has spanned over 101 years.

Yes, it’s a sad occasion — but you young ones, especially, must never forget that he was a happy, contented man.  He lived a rich life, full of joy - and you all helped with that.  I know he would love to see some smiles on your faces, as we now share some of our cherished memories.

Firstly I would like to acknowledge those attending from the Opal Nursing and Mountain View Lodge, together with Dad’s other village friends.  Thank you for your care and friendship – it has been invaluable.  Thanks for the good times.
Today we also have a representative from Murwillumbah RSL, Mr. Ron BOSSINK.  A veteran who has served the club admirably and is to be congratulated on recently receiving his NSW Community Service Award.  Thank you Ron.

We also have a contingent from RAAF 3 Squadron, namely:

Adrian is the Squadron C.O. and I congratulate you on being awarded the Conspicuous Service Cross in the recent 2022 Queen’s Birthday Honours.  You men are following on from our father and his old veteran mates, in your solid commitment to service.  We thank you for this and all wish you good luck and safe times ahead.  Thank you for honouring him with your presence today.

Not forgetting...  Hugs for you Vicki CRIGHTON, representing our 3 Squadron Association.  - Our fathers served together and were mates.  Dad valued your friendship enormously.  Thank you Vicki for being here.

It’s comforting to be amongst family and friends to pay tribute to Dad.  Wendy and I thank you all.

- Crikey, how do you tell the story of a man who has lived such a full, healthy and colourful life??  To that end I have enlisted the services of my grandson, Dylan, who will share with us an essay written by his younger brother, Byron, last year when he was twelve.  The task was to describe the person the student most admired.  His essay was published in the school newsletter and read at a Palm Beach / Currumbin High School Assembly.

BIOGRAPHY OF ALEXANDER THOMSON
[Written by Byron TAYLOR, grandson, at age 12, for a school assignment.]

Alexander Thomson was born on the 14th of July 2021 at Dubbo District  Hospital: birth certificate no. A 21389.  He had two brothers, Bill and Jack and one died young from diseases.  His father David Thomson worked as a boot maker for the military.  David was 31 when Alex was born.  Alex’s mum was 28 when Alex was born.

Not long after his brothers died it was the time of the Depression 1929 to 1932.  During this time no-one had food to buy or jobs available.  People had to hunt and farm foods themselves.  Alex was only 12 when this economic crisis was happening.  This taught Alex to be persistent, resilient and independent.  He had to learn to hunt food for his family, learn how to grow veggies, learn to survive without a local shopping centre.  This prepared him for life.

After the time of the Depression he  graduated school in 3rd Form, otherwise known as 9th Grade.  His hobbies were bike riding, square dancing and poetry.  His first job was a motor mechanic trainee.  Not long after his teenage life it was the time of World War 2.  He enlisted in September 1940, Air Craftsman Class 1 for Australia.  He lived in the desert for many years during the war.  During this time in the desert he learned poetry and carried that on in his life.  The days of the Depression paid off: he knew how to survive and hunt in the desert.  His main job was to drop bombs on enemies, but the one thing he said he really wanted to do was be a jet pilot- that was his dream.

Finally Peace - the war was put to an end in 1945, the happiest moment in Australia back then.  They had defeated Hitler.  Alex moved on, earned his pride, met the love of his life, Lillian Melva in 1945.  They got married and Alex became a builder and built their very own house in Sydney for his beloved children, Chris Thomson and Wendy Thomson.  They lived in happiness, they played golf, bowls, rode bikes.  Alex carried on with his poetry and joined the choir and proudly supported himself.

Then sadly in 2010 Lillian died - his desert flower was gone.  The past ten years now he’s  been living happily in Murwillumbah, NSW, at the retirement home, 'the Lodge'.  Our family visit him all the time.  On his 96th birthday he still carried  his dream of being a pilot so he got to ride in a Tiger Moth plane for his birthday at 96.  Our family were all there looking up at our legend, then for his 97th birthday he went skydiving at Kirra Beach.  He has learned to live his life by having fun and taking risks, and the best super power is he’s 99 and he’s still the kindest, caring, loving man you’ll ever meet.  And no, he doesn’t need a wheelchair, he has no problem with socialising, and he is the best influence for every young man.  And he’s still on his way to 100, living the dream.

Overall, by participating in all of these events he shows his leadership, courage and passion towards his country and family.  This is why he is so inspiring to me.

Byron, would you please come up?  I’m sure Great-Grandfather would like you to have his 3 Squadron cap!

Dad was a special man.  He was a country boy of the NSW Western Plains.  He was humble, considerate, kind and dependable … And he supported family and friends throughout his life.

Dad had a tough upbringing.  His mother, Irene, was a lovely lady and mother.  However his father, “Old Dave”, was a hard man and difficult to live with.  He had a problem with alcohol and also ran a weekend boxing tent.  In fact Dad ordered him out of their family home for a time before he enlisted in 1940, but fortunately they later reconciled.  Maybe these early life experiences contributed to Dad being such a loving husband to Mum, and a great father to Wendy and I.

Byron made mention of Dad’s teenage years.  He enjoyed the Scouts and attended a Melbourne Jamboree in 1932.   Actually one of my favourite keepsakes is this old compass (from his scouting days). …With which Dad and his party circumnavigated Rommel’s tank advance and safely returned to base!

Dad’s favourite sport was cycling …in fact he was the Western District Champion and was destined for Olympic selection; but the war intervened in 1940.  He was also an accomplished boxer.  Dad and his brothers, Bill and Jack, were tasked with boxing in the junior preliminary bouts in Dave’s tent, blindfolded!  …For pocket money on Saturdays, prior to the horse races! 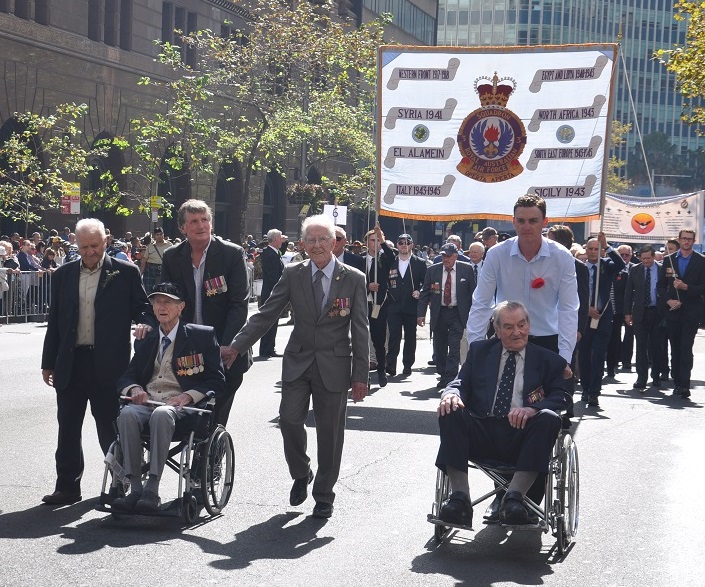 Dad moved to Sydney in 1939 as an 18-year-old and there he enlisted in the RAAF.  Dad served in WW2 in the North Africa campaign.  His position was a Flight Sergeant (Armourer-in-charge) for “C” Flight. 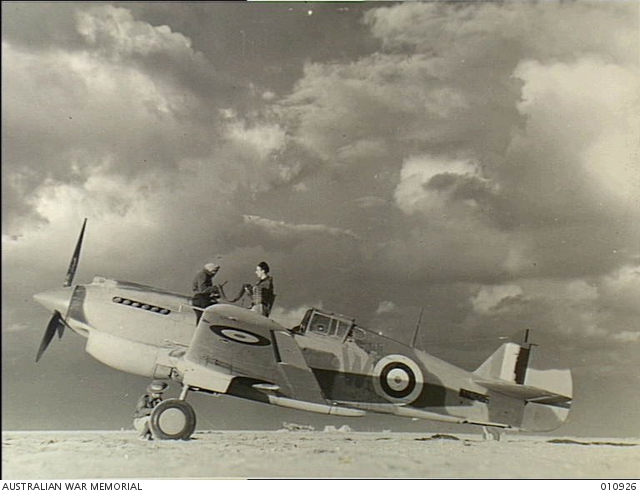 3 Squadron backed up the Army and helped repel the German advance at El Alamein, in Libya and Tunisia.  It was a tumultuous battle they won, and it proved to be a turning point in the war.   Dad was nicknamed “Gus” during the desert campaign, an old tradition, a name that he still answered to when in company with 3 Squadron friends.  (The officers here today all carry their own nickname.)  “Gus” it has been for the past 82 years…  What a great association!

After the war Dad met and married our dear mum, Lillian MELVA.  He re-trained as a carpenter and built our family home in Caringbah, Sydney.  They lived there happily for over 60 years and Wendy and I enjoyed loving family times.  His family grew to six grandchildren and 16 great-grandchildren.  Dad loved his sport; he was a keen golfer and tennis player and actually laid out his own putting green and tennis court at home.  He also enjoyed lawn bowls and was a lifetime member at Miranda Bowls Club.  Dad was a keen gardener, creating beautiful dahlia gardens for Mum, which she enjoyed immensely in her declining years.  Mum and Dad were accomplished ballroom dancers, Dad continuing this in his years at Mountain View, as well as reciting poetry and singing in the choir.  (But I will let my wife Sandra talk about his poetry later.)

Dad was such a popular and friendly man; he succeeded in making so many friends at work and at play, from his young years until the present day.  He endeared himself to his family and was respected by his peers.  Yet he was such a quiet, unassuming man, and I don’t believe he had an enemy in the world.  I recall when he retired from working at the Uni of NSW, 44 years ago: there were hundreds of well-wishes presented on big cards.  Dad simply loved life and embraced it wholeheartedly.   What a great example he has set for his grandkids and great-grandkids!

It would be remiss of Wendy and I, at this time, if we did not acknowledge our partners, Keith and Sandra, for their love and support of Dad, particularly in these later years.  Their efforts have been tremendous and extend back 60-odd years.
Keith - you particularly helped with Mum and Dad’s physical relocation from Sydney and generally assisting with all things family along the way.
To my wife, Sandra, for her exceptional love and care - and sharing time with Dad.  You have been marvellous.

For me personally, I am thankful to have shared more of Dad’s life since he moved to the North Coast 14 years ago.

Mum passed away in 2010.  Not having to care for Mum freed-up Dad’s time, enabling him to enjoy going to his great-grandkids’ sports and school events and wider family holidays.  Wendy and Keith also moved up three years ago, so they too have enjoyed more of his company.

Dad has been able to visit his old 3 Squadron mates in Sydney, Melbourne, Canberra and Newcastle, rekindling old friendships.  He enjoyed his time at Mountain View Lodge immensely; lots of good times with lovely people.  He threw himself into life, just like jumping from an aeroplane… 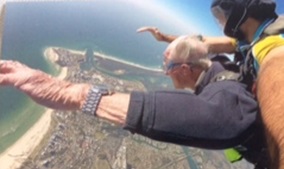 
But - remember- the thing he most treasured was being with you, the family.

In closing, may I remind you that Dad grew up in the Donald BRADMAN cricketing era.  (Donald was a legend too!)  Dad, like The Don, played life with a straight bat.
He was good at it…  It’s marvellous he made his century!

We know he loved his poetry…  This stemmed from poems written by servicemen in the Western Desert during the war.  (There were no iPhones!)  Dad has read and recited them all…  He mostly enjoyed the good old Aussie classics, those with the love of a sunburnt country, the ironbark and the crack of the stockwhip on the Snowy and the plains.

So, in the words of Banjo PATERSON, he has seen:

“The vision splendid of the sunlit plains extended,
And at night the wondrous glory of the everlasting stars.” 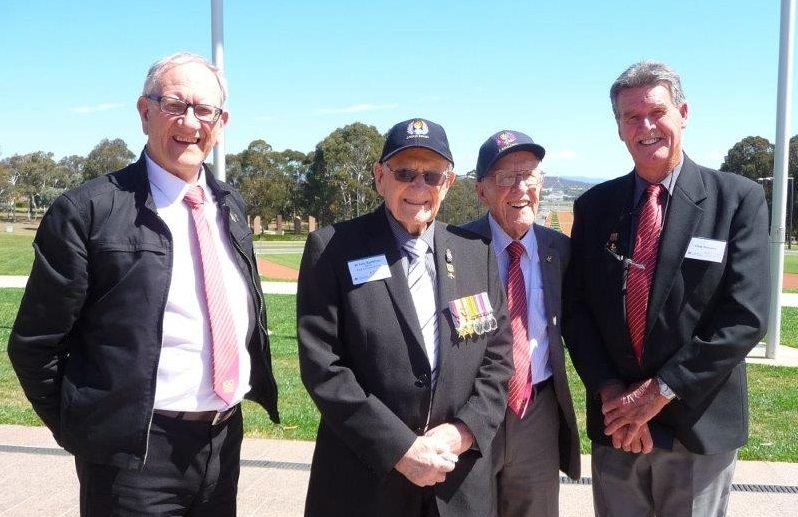 A beautiful day in Canberra in 2017 for the National Commemoration of “Alamein +75 years”.
Two of 3SQN’s surviving Alamein veterans, Felix SAINSBURY and Gus, were honoured to be invited.