S/Ldr Murray Nash's natural metal CV-P KH716, pictured at dispersal.  500 lb. bomb carried under each wing.
Note where the filler is showing along the front edge of the Silver painted wing.   [Photo via D. Hourigan]

Recently, quite a bit more information has become available on exactly how 3 Squadron's P51-K airframes were painted, through the efforts of Dick Hourigan (who sent me a number of very useful photos to copy) and Steve Brooking in the U.K., who supplied a couple of vital bits of info which enabled me to sort all this out.

The first Mustang Mk.III Razorback versions arrived to re-equip the Sqn on the 13th of November.  The first P-51K (Mustang IVa) version to be received was KH677 CV-P which arrived on 26th Nov.  This machine was the mount of S/Ldr Murray Nash, but is different from his later, well known, Natural Metal mount KH716 (per the heading photo)  Instead KH677 was camouflaged as per the excellent article by Dick Hourigan in APMA Magazine in 2002.  For those interested, this aircraft was re-coded CV-◊ when Nash received KH716 on 15th Dec 1944 and was lost when 3 Squadron suffered its last combat fatality of the war, in April 1945.

The P-51Ks used by 3 Sqn were decorated with the White Southern Cross on a Medium Blue rudder, with Red Spinners (some with a partial natural metal portion).  Some were camouflaged, as per the Mustang Mk.III aircraft, but others, especially late in the war, were operated in Natural Metal.  Camouflaged aircraft carried codes in white.  Natural Metal aircraft carried them in either Black or Medium Blue as per the rudders.

When modelling these aircraft don't forget that you will have to make modifications to the base model to give it the appropiate prop of the 'K' version and you will also need un-shrouded exhausts as all the machines that I can find photos do not have the exhaust shrouds fitted.

Above two photos show snowbound P51Ks during early 1945.
Note how the camo returns around and under the wing leading-
edges and the 'screamer' carried below the wing tip as per the
P-40Ls. 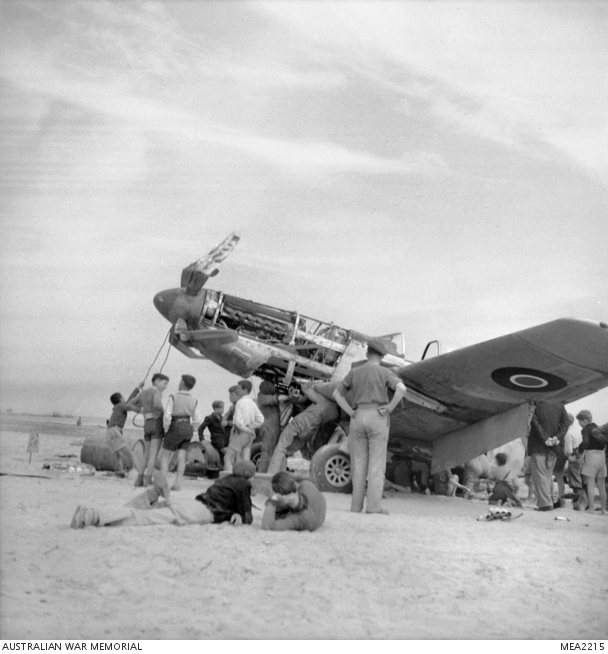 On to MUSTANG Page 2